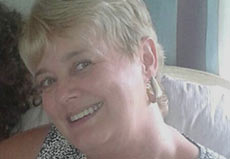 My name is Cathy and I would like to tell you how Jeff changed my life.  I started having minor back pain nineteen years ago.  At the time I went to a Chiropractor for several weeks – no good, I tried a tens machine – no good, I also had steroid injections – no good.  I just had to learn to live with it.  It wasn’t major pain but it did prevent me from walking any significant distances. Window Shopping or standing for long periods of time even Concerts and social events were now an impossibility toattend.

Several years went by and the pain gradually became worse – not unbearable but nasty just the same.  My GP put me on anti-inflammatories, these did stop the pain but I did not want to stay on them for long periods. However after a few more years I had no choice but to take them every day, even though it meant I could start bleeding internally in my later years.  In the meantime I went back to more intense Chiropractor treatments,  3 times a week HE SAID HE COULD CURE ME, he also gave me a gait scan and said my posture was wrong and persuaded me to pay a fortune for two pairs of ‘special in-soles’ which didn’t help at all. I tried several medical massages, good only on a temporary basis, I tried acupuncture and dry needling, no good. I went to physiotherapy, no good.  More recently I went to a ‘Pain Management Clinic’ the Consultant there sent me into Hospital twice for steroid injections and even this was NO GOOD.

Then I heard about Jeff.

I had nothing to lose so I went to see him. Almost immediately he told me it was not my back but my kidneys that was causing my pain. He was able to finally tell me what was causing the pain and how I was going to correct it. My pain went away for a few weeks and just as the pain was returning I went to see him again and that’s when the magic happened, the pain vanished permanently. What is most admirable about Jeff is that he never said he could cure me, instead he told me he could educate me on the true cause of my pain and explained that only when you address the cause of an issue can the issue begin to truly heal. He told me he could help me “cure” myself. I now know how important it is to work with my own energy and to locate and treat the CAUSE. I cannot recommend Jeff highly enough.  Recently I went to not one but two St. Patrick’s Day Parades which in previous years was completely out of the question, I shall forever be in his debt.

Thank you so very very much Jeff.